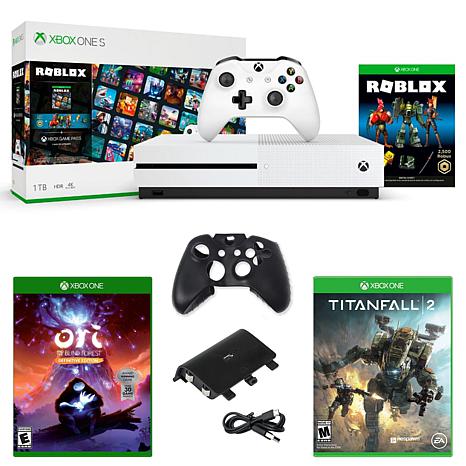 $475.99
S&H: $15.22
This item is in your Favorites. You will receive an alert when your item comes back in stock.
ADD TO FAVORITES
We will alert you as soon as your item is back in stock.
12 Months VIP Financing. see details
Related Searches Video Game Consoles Video Games & Systems shop All Electronics

Own The Xbox One S 1TB Bundle and dive into the very best of Xbox One. Get instant access to over 100 great games with 3 months of Xbox Game Pass. Watch 4K Blu-ray movies and stream 4K video on Netflix, Amazon, hulu and experience richer, more luminous colors in games and video with high dynamic range Technology. Xbox One has over 1,300 great games including today's blockbusters, 200 console exclusives, and 400 Xbox classics. Xbox One is the only Console where you can play new EA games for a limited time before they're released with EA Access. Explore immersive virtual lands with this XBox One S 1TB Roblox console bundle. Three exclusive Roblox figures with accessories provide offline fun, and 2,500 Robux let you purchase fun accessories and gear for your in-game avatar. This XBox One S 1TB Roblox console bundle includes one month of Xbox Game Pass Ultimate with instant access to over 100 game titles. The forest of Nibel is dying. After a powerful storm sets a series of devastating events in motion, an unlikely hero must journey to find his courage and confront a dark nemesis to save his home. “Ori and the Blind Forest” tells the tale of a young orphan destined for heroics, through a visually stunning action-platformer crafted by Moon Studios for the Xbox One. Featuring hand-painted artwork, meticulously animated character performance, and a fully orchestrated score, “Ori and the Blind Forest” explores a deeply emotional story about love and sacrifice, and the hope that exists in us all. Pilot and Titan unite as never before in Respawn Entertainment’s highly anticipated Titanfall 2. Experience a single player campaign that explores the unique bond between man and machine. Dominate the competition in multiplayer action, featuring six all-new Titans, enhanced Pilot abilities, an expanded customization system, new maps, weapons and much more ACCOLADES 2016 Best of E3 Game Critics Award Winner for Best Online Multiplayer Tomee's Controller Battery Pack is a rechargeable battery for your Xbox One controller. Using the included micro USB cable, you can recharge the battery pack while it's in the controller, so you never have to use AA batteries again.
Shop all Microsoft