We use JavaScript to create the most functional website possible for our customers. JavaScript enables you to fully navigate and make a purchase on our site. If disabled the content or the functionality of the website can be limited or unavailable. Please enable JavaScript in your browser for the best possible experience. Thank you!
701-130 Ninja 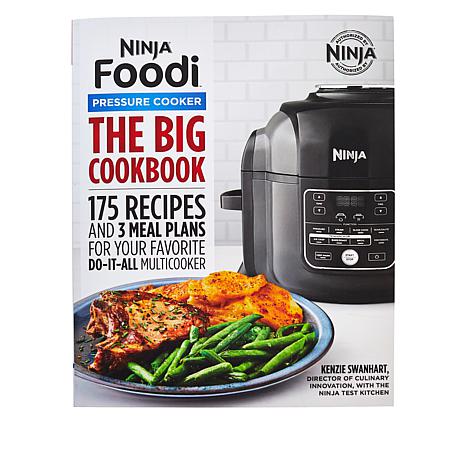 The Big Ninja Foodi Pressure Cooker Cookbook by Kenzie Swanhart
The wide variety of easy and tasty recipes in the Big Ninja Foodi Pressure Cooker Cookbook will allow you to use your favorite appliance every day, for any meal—breakfast, lunch, and dinner. Written by Kenzie Swanhart, Ninja's director of culinary innovation, along with her team of Ninja Test Kitchen Chefs, this is the complete official cookbook for your Ninja® Foodi™ pressure cooker. Recipes include Cinnamon Bun Oatmeal, Sweet Potato Hash and Eggs, Three-Layer Taco Dip, Pork Chops with Green Beans and Scalloped Potatoes, Veggie Loaded Pasta, New England Lobster Rolls, Cashew Chicken, Bacon-Wrapped Hot Dogs, Apple Crisp and so much more!
What You Get